“Up Late with Alec Baldwin” Debuts 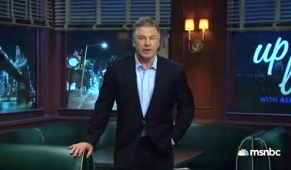 Compared to the average in that timeslot over the past few weeks, Baldwin’s show was up in both categories, although compared to only last Friday the program was down slightly in the demo. The Friday 10 PM timeslot has usually been filled with MSNBC’s crime documentaries, though “The Last Word” and other special programming has also aired in that hour on occasion.

“Up Late” has also named Jonathan Larson executive producer. Larsen had been EP of “Up with Chris Hayes,” overseeing the transition to new host Steve Kornacki. He previously served as a senior producer on “Countdown,” a writer and producer for “AC360″ and a political producer for “The Daily Show.”

“Up Late with Alec Baldwin” Debuts