What Do Low ‘Today’ Show Ratings Mean for Matt Lauer? 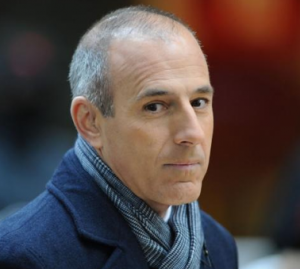 The “Today” show has fallen harder than Jennifer Lawrence on Oscar night. A former NBC executive tells Confidenti@l that as the former number one morning show slips into third place locally (and New York is the most vital U.S. market), replacing Matt Lauer is now seriously on the table.

“They are rearranging the deck chairs on the Titanic. They can shift things around, but it’s not helping,” says our source.

“Their short-term solution is looking for new experts to replace some of the familiar faces that have been on the show forever. What they also need to do is hire someone to shake up everything and have the discussion about what to do with Matt.”

“Today,” which had held the top spot in mornings for the past 16 years, is now behind both “Good Morning America” and Fox 5’s morning show “Good Day New York,” losing to both in the February sweeps. “GMA” pummeled “Today” for the third week in a row, while “GDNY” won the coveted 25-54 age group.

“‘Today’ can’t continue like this,” says our source. “If they don’t act soon, the show will be a distant memory.”

Our source adds that Comcast, the network’s owner, is “aggressively” looking to add another executive producer to the show. However, “they are having a lot of trouble finding anyone until the network makes the one change that needs to be made – replacing Matt Lauer,” the source said.

But another source says the show will not be hiring another EP, but has hired a senior broadcast producer to fill the spot of recently promoted Don Nash. That new staffer will start in a few months.

Morale at “Today” is also at an all-time low, and staffers are fear-stricken over losing their jobs after what happened to departed co-anchor Ann Curry, former executive producer Jim Bell and NBC News president Steve Capus, who resigned in February.

“On top of everything, Matt took a vacation during sweeps. It doesn’t seem to matter if he’s around or not,” says our original source.

To NBC’s credit, “GMA” numbers got a boost from Robin Roberts’ return on Feb. 20, and from the Oscars and the “Dancing With the Stars” cast announcement this week. And Lauer’s vacation has come in the exact same week three years in a row, coinciding with his kids’ school vacation.

What Do Low ‘Today’ Show Ratings Mean for Matt Lauer?

Trashy Television Talk Shows Were Made Famous In Chicago