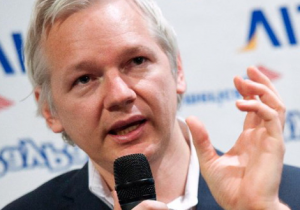 WikiLeaks founder Julian Assange will host a new political talk show that focuses on power brokers, revolutionaries and where the world goes next, the anti-secrecy website announced on Monday.

The half-hour show will see an initial run of 10 once-weekly episodes, beginning in March.

“Assange will draw together controversial voices from across the political spectrum — iconoclasts, visionaries and power insiders — each to offer a window on the world tomorrow and their ideas on how to secure a brighter future,” a media advisory explained.

“Through this series I will explore the possibilities for our future in conversations with those who are shaping it,” Assange said in the advisory. “Are we heading towards utopia, or dystopia and how we can set our paths? This is an exciting opportunity to discuss the vision of my guests in a new style of show that examines their philosophies and struggles in a deeper and clearer way than has been done before.”

The series was being produced by Quick Roll Productions, which was still in the process of examining licensing inquiries for the show.

Assange has been under house arrest in the U.K. since late 2010, pending an extradition request by the Swedish government over an investigation into sex crime allegations. His case is expected to be heard by the British Supreme Court next month.

Bob Schieffer to Host ‘Face the Nation’ from Miami