Alec Baldwin “Not Welcome Back” at MSNBC? 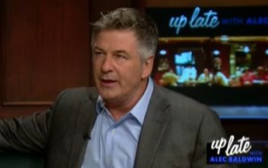 Alec Baldwin is not welcome back at MSNBC because of his infamous angry behavior, network insiders say — including complaining that “the air at 30 Rock is too dry.”

Sources exclusively tell us that MSNBC chiefs are not exactly falling over themselves to get boisterous Baldwin back in the building. One insider said, “He would only show up at work an hour a week to prep for the show, and when he did turn up, he was in an angry mood, red-faced, and shouting at all the staff. And he said the air at 30 Rock was too dry, it was bad for his voice, he needed a humidifier.”

It was quickly evident that he wasn’t living up to the promises he made to MSNBC president Phil Griffin when he was signed to host “Up Late With Alec Baldwin.” The source explained, “MSNBC only signed Alec to keep him out of reach of CNN, but considering his recent boasting about beating Anderson Cooper in the ratings it is highly unlikely CNN would sign him. Alec had promised Griffin he’d bring in top political and cultural guests, he delivered Bill de Blasio, who was great for the first show, and Debra Winger, who is a wonderful actress but certainly wasn’t right for a whole hour.”

Then there were his ratings. According to Deadline.com, Baldwin’s last show hit a demo low, pulling in only 101,000 viewers aged 25 to 54 against 395,000 total viewers — a 41 percent drop from the 172,000 viewers 25 to 54 who watched the Oct. 11 debut. MSNBC suspended Baldwin this month after he hurled an anti-gay slur at a paparazzo. He apologized, “I did not intend to hurt or offend anyone with my choice of words.”

An MSNBC rep said, “Every episode of ‘Up Late’ has beaten CNN and increased MSNBC’s audience in the time slot. Alec has been dedicated to developing ‘Up Late’ and spent hours each week in production. He’s got great ideas and has a collaborative relationship with the staff.”

Alec Baldwin “Not Welcome Back” at MSNBC?