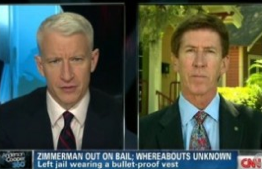 CNN is planning specials every night at 10 PM this week, focusing on the George Zimmerman murder trial.

The specials– titled “Self-Defense or Murder? The George Zimmerman Trial”– will be hosted by Anderson Cooper. Every night, Cooper will be “joined by Mark Geragos, Marsha Clark, and Jeffrey Toobin will condense that day’s opening statements, testimony, and analysis,” CNN says.

There will also be special guests. Tonight they include the Martin family attorney, and a linguistic expert whose testimony was thrown out over the weekend. The format sounds similar to the “AC360″ round-table editions that CNN experimented with at 10 PM earlier this year.

CNN president Jeff Zucker said network executives were “very pleased” with how those programs turned out.

It also bears a striking resemblance to “HLN After Dark,” which joined that channel’s lineup during the Jodi Arias trial, and will be getting a permanent spot on the channel’s primetime roster.