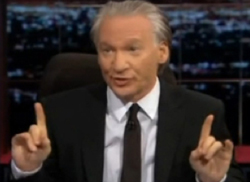 And he thinks it has something to do with his views on religion.

In an interview with The Hollywood Reporter, Maher said that religious Emmy voters don’t vote for him because of his outspoken atheism.

“A panel of like 10 people watches one tape,” he said. “If half of those people are religious, that probably eliminates me right there. A lot of people wouldn’t vote for such an outspoken atheist, someone who made ‘Religulous.'”

In the same interview, Maher weighed in on fellow atheist Christopher Hitchens and the religious people out there hoping Hitchens, who is battling esophageal cancer, will make a “deathbed conversion” to religion.

“People who are waiting for that are going to be disappointed — because I don’t think he’s going to die,” Maher said. “I expect him to be back on our panel, if not this season then next. People wish the fear that drives them their whole life would now drive him, because he’s got cancer. But he’s not a fearful guy, so it’s not going to happen.”