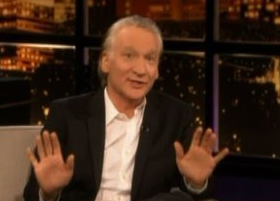 Chelsea Handler asked Bill Maher on “Chelsea Lately” who was the next most hilarious candidate.

“Rick Santorm,” Maher said with virtually no hesitation. “The guy who’s obsessed with gay sex!” He then talked about Santorum making public appearances in sweater vests, “which is proof he does not have one gay friend.”

Maher tied this obsession with another thing Santorum has brought up in debates, specifically that he “wants to bomb Iran.” According to Maher, it all makes sense if you make certain allusions about his gay sex obsession. “I think people who are sexually frustrated want to bomb other countries,” he concluded.

Rosie O’Donnell: Oprah is a Better Boss than Barbara Walters