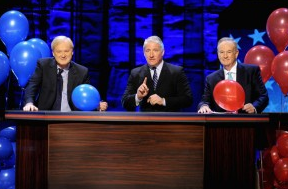 Comedy Central taped its “Night of Too Many Stars” benefit for autism awareness, and the theme of the night was “unlikely pairings.” Host Jon Stewart tapped his Fox News sparring partner Bill O’Reilly for an appearance, where he appeared alongside (quite possibly for the first and last time) MSNBC host Chris Matthews for a faux “debate” moderated by CNN’s John King. Also: O’Reilly and Matthews inhaled from helium balloons before making their arguments.

But not before O’Reilly and Matthews got off some scripted zingers: “You, Bill, give everyone’s crazy uncle something to say on Thanksgiving,” Matthews said. O’Reilly, who called Matthews the product “if Dennis the Menace and Alex Skarsgard had a child,” said, “You constantly sound like a man falling down the stairs,” and “someone who takes the pressure off his guests, by doing all the talking.”

We will post the video when we get it. The “Night of Too Many Stars” airs on Comedy Central October 21.