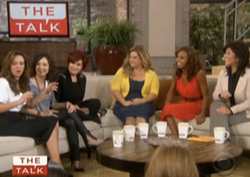 CBS’s ‘The Talk,’ the first daily network talk show to premiere in daytime in nearly 10 years, has been renewed for the 2011-2012 season.

‘The Talk,’ hosted by Julie Chen, Sara Gilbert, Sharon Osbourne, Holly Robinson Peete and Leah Remini, examines topical events and contemporary issues through the eyes of five female hosts who are all mothers.

“After only a few months on the air, ‘The Talk’ has delivered creative and ratings growth and established a strong profile in daytime,” said Nina Tassler, President, CBS Entertainment. “The co-hosts have clicked together, the topics have connected with the audience and the show has added a new dimension to our top-rated daytime line-up. We’re excited about its current success and the potential to grow and evolve ‘The Talk’ even further.”

“We’re proud that ‘The Talk’ has emerged as a unique player in the daytime arena,” said David Stapf, President of CBS Television Studios. “The goal was always to create a show that offered different perspectives to issues facing families. The show’s success is largely due to our hosts’ chemistry and we’re thrilled that the topics we are addressing are resonating with audiences.”

Since its premiere in October when it replaced the daytime drama, “As the World Turns,” THE TALK has averaged 2.21 million viewers, 1.1/06 in women 25-54 and 0.8/05 in women 18-49. THE TALK has seen its ratings increase during the last two weeks, delivering season-high weekly audiences during the week of Jan. 7 (2.34 million viewers) and Jan. 14 (2.40 million), while also matching season-highs in key women demographics.

During the November sweep, THE TALK improved the year-ago time period on the 14 CBS Owned stations by +33% among women 25-54.