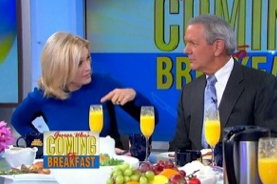 Former “Good Morning America” anchors Charlie Gibson and Diane Sawyer were reunited on the show this morning, dropping in as the guests for the show’s “Guess Who’s Coming to Breakfast” segment.

Robin Roberts, who joined the program as news anchor in 2005 during Sawyer and Gibson’s tenure as anchors, saluted the pair for their years on “GMA.” “What we have today, and what we are enjoying today, you laid the groundwork,” Roberts said.

“You know, it’s amazing. They have five hosts now,” Gibson joked in response. “George does a segment every two weeks. It’s amazing. We used to have to prepare this whole show, just the two of us.”

Gibson and Sawyer remained in the studio after the segment was over, chatting and spending time with “GMA” staffers.