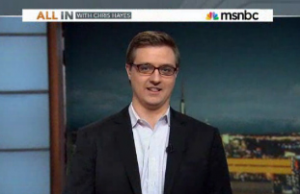 The New Yorker takes a deep dive into the world of cable news, with a specific focus on MSNBC (subscription is required). A good deal of the article’s content will not be surprising to regular readers, but there are some surprising anecdotes.

For starters, Chris Hayes opens up about his ratings struggles at 8 PM, and how the format of his program has been tweaked ever so slightly. He now wears a tie, and isn’t afraid to call out competing cable news hosts by name.

“Obviously, the numbers are bad right now,” he said. But television ratings are notoriously noisy, distorted by imperfect monitoring and by the imperfect science of statistical extrapolation, so he was on guard against drawing lessons from a strong Thursday, or a weak Monday.

“Looking at day-to-day ratings tickles the worst instincts human beings have on casual inference,” he said, sounding as if he were a rat, describing his own lab. “It creates cargo cult. It creates rain dances. it’s like Oh my God, the number’s good today. What did we do yesterday? Well, we danced, and it rained. So let’s dance!”

The Best Interviewers On TV