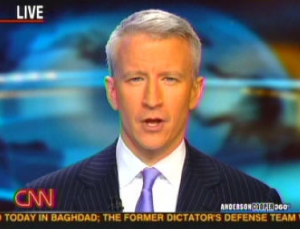 With cable news’ third quarter ratings released today, most news outlets opted for the same angle — CNN is gaining on MSNBC in the race for second place.

MSNBC edged its rival by just 12,000 viewers during primetime in the adults 25-54 demo.

Of course, first place is still out of the question.

Though Fox fell to fifth in all of cable in prime time and seventh in total day, no other cable news network is even in the top 25 of either category.

Roger Ailes’ network also has nine of the top 10 shows in the adults 25-54 demo. Fox’s place atop the cable news universe? Beyond secure.

So, with journalists pushing for a fresh angle on the ratings competition, they all glommed onto the story of CNN gaining on MSNBC.

Bill Carter kicked things off in the New York Times this morning with more extensive analysis than most.

“How badly has MSNBC been hurt by the loss of Keith Olbermann? Enough, apparently, to be on the verge of falling back into third place among the cable news networks,” Carter wrote.

More puzzling was the quote from a journalism professor suggesting MSNBC slipped because of its partisan coverage. That was initially why critics thought it was gaining on CNN. CNN lacked a point of view.