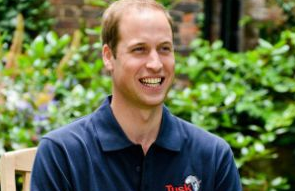 CNN has secured the first U.S. TV interview with the UK’s Prince William since the birth of his baby boy, Prince George Alexander.

Correspondent Max Foster sat down with William, and asked about being a new parent, and his passion for Africa. The interview is technically part of a documentary, “Prince William’s Passion: New Father, New Hope,” which was produced by production company Spun Gold TV, in partnership with CNN.

Portions of the interview will air on “New Day” Monday, August 19, with the full special airing on CNN Sunday, September 15 at 10 PM. ITV in the UK also picked up the documentary, and will air it in September.

As has become standard practice for British Royal interviews, journalists are able to ask about the subject of interest to them (babies, weddings, etc) on the condition that it also air programming of importance to the Royals.