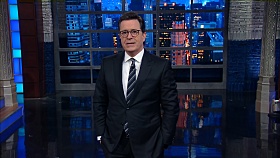 Stephen Colbert finally responded Wednesday to online criticism of his off-color joke about President Trump that led to the hashtag #firecolbert and a call to boycott advertisers of the “Late Show,” which the comedian hosts.

“So while I would do it again, I would change a few words that were cruder than they needed to be,” he said during the taping of Wednesday’s broadcast, according to a transcript released by CBS.

“I had a few choice insults for the president … I don’t regret that. He, I believe, can take care of himself. I have jokes; he has the launch codes. So, it’s a fair fight.”

Colbert’s brief response comes after criticism from Trump supporters and conservatives spread on social media in the past two days.