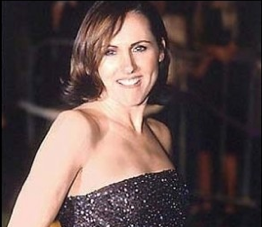 Former latenight star Molly Shannon is heading to daytime. The Saturday Night Live alumna is joining CBS’ daytime talk show The Talk as a guest host for the month of September. When the show’s second season starts next Tuesday, Shannon will be sitting around the Talk table alongside returning hosts Sara Gilbert, Julie Chen and Sharon Osbourne and new addition Sheryl Underwood.

Osbourne will be on tap for the start of the season but she is scheduled to take some time off in the fall, so Shannon may cross paths on the show with reality matriarch Kris Jenner who will be filling in for Osbourne.

Shannon is a comedy actress like the 2 original Talk co-hosts, Leah Remini and Holly Robinson Peete, whose options were not renewed. But Shannon also has a strong live performance and improv background, having spent 6 years on SNL. And she fits into The Talk‘s theme of taking on current events from a mom’s perspective as she has 2 kids. Shannon, repped by Gersh and Framework, recently co-stared in the hit feature Bad Teacher and the musical Promises, Promises and did an arc on Glee. She also has a comedy project in the works at HBO.