Conan Nominated For Emmy Instead of Leno for “Tonight Show” 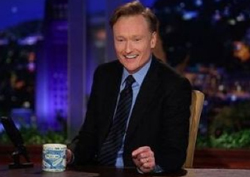 Jay Leno may have the show, but Conan has the Emmy nomination.

TBS, which will air Conan’s new show beginning in the fall, began a campaign last month to have Conan’s previous work on “The Tonight Show” nominated for the Emmy.

Also nominated in the category are “The Colbert Report,” “The Daily Show with Jon Stewart,” “Real Time with Bill Maher,” and “Saturday Night Live.”

Conan Nominated For Emmy Instead of Leno for “Tonight Show”