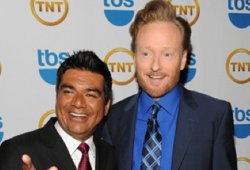 Conan O’Brien told a concert hall filled with advertisers Wednesday that he envisioned his new TBS talk show would “pick up where ‘Hee Haw’ left off.”

“I have a hunch that 32-year-old men want to hear corny jokes and classic country music,” said O’Brien, who strapped on a guitar and played a personalized version of “On the Road Again.”

He was joking, of course.

O’Brien, whose show starts in November, was the star attraction as Turner Entertainment Networks outlined its programming plans. The comic said it was his first time back in New York since NBC brought him in a year ago to promote his takeover of the “Tonight” show.

Most of his fans know how that went: he lasted half a year before leaving rather than move his time slot to accommodate Jay Leno.

“If anyone in the room can explain what happened a few months ago, I’m all ears,” he said. “I’ll be in the lobby later. The plot to ‘Lost’ is more plausible.”

His appearance opened with a short film where a fat, disheveled O’Brien is passed out amid pizza slices and beer bottles, answering a ringing phone with one word, “Job?”

He said the live concert tour that he is currently on is his happiest experience in 20 years of show business.

“I can’t wait to get back to having fun on television again,” he said. “It’s all I want to do.”

His new boss, Turner networks chief Steve Koonin, said he wanted to thank an NBC employee for giving his company two of its best shows: O’Brien’s and the police drama “Southland.” A picture of Leno flashed on the large screen behind him. NBC gave up on “Southland” after one season, in part because the 10 p.m. time slot it filled was instead given to Leno in his failed prime-time experiment.

George Lopez, whose own talk show will be paired with O’Brien’s, noted that it was 60 years ago on “I Love Lucy” that a Latino and a redhead made television history.

“This fall Coco and Loco will do it again,” he said.

The Turner networks outlined their fall schedules on the same busy week as the broadcast networks to drive home to advertisers that TNT and TBS reach almost the same number of people.

The drama-focused TNT will air seven new or returning series this summer, when the broadcast networks are concentrated mostly on reruns or reality.

The network also announced it had several series in development, including “Green Detective,” a Steven Bochco series about an environmentalist insurance adjuster, a medical show produced by Don Cheadle and a cop show created by Jamie Foxx.