Could Glenn Beck Be The Next Jon Stewart? 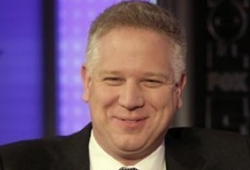 At a recent tour stop in Albany, Glenn Beck made a few announcements that roused the press. Chief among them: he planned sell his Connecticut mansion and leave New York City.

But he also made another, more surprising statement. “I’m going to make sure,” Beck told the sold-out crowd, “that Stephen Colbert and Jon Stewart don’t occupy the space of comedy alone.”

Despite his reigning status as resident media melodramatist, Beck has always had an interest in the comedy form. In 2008 he traveled the country with “Unelectable,” traipsing around the stage sporting a neon-orange hunting jacket and holding a toy rifle, mocking the liberal view of right-wingers. In 2009, he followed suit with his “Common Sense Comedy Tour,” which was simulcast across the country in 440 theaters.

But taking one’s act on the road, amidst fans, is different than becoming the conservative version of Stewart or Colbert. Thus far, no successful news comedy show aimed specifically at right-wingers has succeeded. The most prominent failure of recent years was Fox News’ “Half Hour News Hour,” which “24” producer Joel Surnow attempted to launch in 2007. Two separate publications deemed it “slow torture,” and it lasted only 15 episodes before being yanked by producers.

On the “Half Hour News Hour,” jokes were delivered to elicit chuckles of acknowledgment, rather than genuine laughs. The attractive hosts simply read off one-liners, “Weekend Update” style, without any real sense of timing or point of view. An example joke: “Barack Obama admitted to doing cocaine in high school. This news sent his approval rating among Democrats PLUMMETING to an all-time low of 99.9 percent.” Cue canned laugh track.

Another bit featured a new Barack Obama magazine in the vein of O: The Oprah Magazine aptly named, “B.O.”.

Uninspired, Catskills-style political zingers don’t tend to fly, no matter the audience. What conservatives haven’t picked up on is that “The Daily Show” succeeds because it attempts to lampoon everyone in power — knocking media elites and pundits from their soapboxes, while trapping politicians in elaborate hypocrisies. If Jon Stewart sat there lambasting everyone on the right side of the aisle with lame, predictable punchlines, viewers would tune out.

Could Glenn Beck Be The Next Jon Stewart?