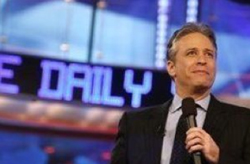 Comedy Central’s The Daily Show just made some ratings history.

Jon Stewart’s series just became the first late-night talk show since at least a decade ago to rank #1 in the adult demo for a full month average other than The Late Show or The Tonight Show.

Daily Show delivered a 1.0 adult demo rating for the month, compared to its broadcast rivals averaging a 0.9.

Also announced Thursday: for this first time since Leno’s return to late night, Letterman has beaten his NBC rival in all the major talk show measurements. For the week ending Oct. 29 , CBS’ Late Show topped The Tonight Show among viewers, adults 18-49 and adults 25-54.

NBC counters that Comedy Central didn’t include repeats in their measurement, and if you include encore telecasts plus originals the broadcasters are back on top. Still, this is a nice victory lap for Stewart.