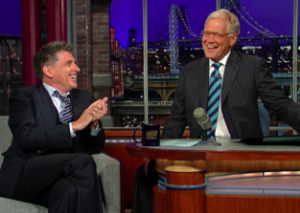 CBS’ two big late-night stars are going to stick around.

Letterman’s renewal means that he will reach his 32nd year behind the desk, surpassing the 30-year reign of his hero, Johnny Carson.

Meanwhile, Los Angeles-based Ferguson will be moving to a larger stage at CBS’ Television City.

The Scottish-American comedian has hosted “Late Late Show” since 2005, building solid ratings and earning a Peabody Award in the process.