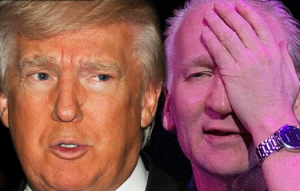 Donald Trump is done beating his chest … at least for now … TMZ has learned The Donald has withdrawn the $5 million lawsuit he filed against Bill Maher for calling him monkey spawn.

Trump sued Maher in February, claiming Maher skipped out on a promise to donate $5 mil to charity if Trump could prove he wasn’t part orangutan. Maher made the offer during an appearance on “Leno” … after Trump made his $5 million challenge to President Obama regarding the POTUS’ birth certificate.

In his suit, Trump said he formally responded to Maher’s challenge with a copy of his birth certificate, proving he’s the “son of Fred Trump” … who is, in fact, not a monkey … and Bill should have to pony up.

Maher scoffed at Trump, calling the whole situation a joke.

Now, we’ve learned Trump filed documents in L.A. County Superior Court on March 29 to dismiss the case … but a rep for “The Apprentice” star says it doesn’t mean the war is over.

“The lawsuit was temporarily withdrawn to be amended and refiled at a later date,” says Michael Cohen (Trump’s Executive Vice President and Special Counsel).

As for when Trump plans to refile the suit … that question is still unanswered.