Donald Trump Slams Letterman For Calling Him A Racist 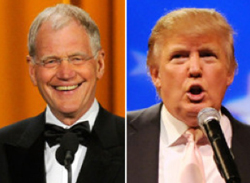 Last Thursday night, “Late Show” host David Letterman, who has had Trump on his show a number of times over the years, dropped his harshest criticism on the potential Republican candidate for President, smacking him with charges of racism.

“But then this nonsense about ‘Oh, how did he get into Harvard, how did he get into Columbia, I’d like to see his grades from Occidental, how was he able to write such a memoir?'” Letterman said, paraphrasing Trump’s criticism of Obama’s educational record, the strangely chosen issue that the real estate magnate moved to after Obama produced his long-form birth certificate. “That’s taking on a whole different point of view as far as I’m concerned… Other people are not amused by this tactic. And by the way, nobody should be amused by that.”

“My point is it’s all fun, it’s all circus, it’s all a rodeo, until it starts to smack of racism,” he said. “And then it’s no longer fun… I have heard enough really smart people to convince me that yes, that is very, very insulting… How can you say things like that if you’re not a racist?”

Letterman would go on to say that if Trump did come on his show — and he was unsure if he even wanted him to do so — he would be expecting an apology from Trump for his behavior.

The harsh words didn’t sit quite well with Trump, who was also smacked around at the White House Correspondents dinner by both President Obama and host Seth Meyers. According to the NY Post, which seems to be Trump’s personal courier, the maybe-candidate fired off a letter to the CBS late night host to both defend himself and hit back as best he could.

“I was disappointed to hear the statements you made about me last night on your show that I was a ‘racist,'” Trump wrote. “In actuality, nothing could be further from the truth and there is nobody who is less of a racist than Donald Trump… Based upon your statements, and despite the fact that we have always done so well together, especially in your ratings, I am canceling my May 18th appearance on your show.”

Donald Trump Slams Letterman For Calling Him A Racist