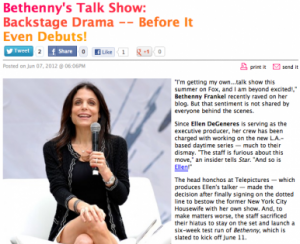 “Bethenny’s Talk Show: Backstage Drama — Before It Even Debuts!” screams a headline from RadarOnline.

According to the webloid, “Since Ellen DeGeneres is serving as the executive producer, her crew has been charged with working on the new L.A.-based daytime series — much to their dismay.”

The blog quotes a so-called “insider” as saying, “The staff is furious about this move… And so is Ellen!”

“And, to make matters worse,” writes RadarOnline, “the staff sacrificed their hiatus to stay on the set and launch a six-week test run of Bethenny, which is slated to kick off June 11.”

Oh yeah, the site says, ”Ellen’s pulling out all the stops with her celebrity contacts to have guests come on Bethenny’s show.”

Here’s what’s right about the RadarOnline story: Bethenny has a new show, which premieres June 11.

Here’s what’s wrong about the RadarOnline story: Everything else.

A source close to the show tells Gossip Cop that everyone involved in the show is “happy,” and that Ellen’s A-Team of producers is gladly doing double duty because it’s a nice change of pace, and they believe in the show’s success.

And RadarOnline’s contention that staffers “sacrificed their hiatus” is totally untrue as well.

We’re told everyone will go on hiatus, as planned, after the “Bethenny” tapings.

Nor is DeGeneres “pulling out all the stops with her celebrity contacts.”

She doesn’t personally book guests on “Ellen” (because she doesn’t have to), nor is she doing it for “Bethenny.”

So basically, RadarOnline knows virtually nothing about “Bethenny,” including, as Gossip Cop has learned, that DeGeneres taped a hilarious appearance for the new show, which will air next week.