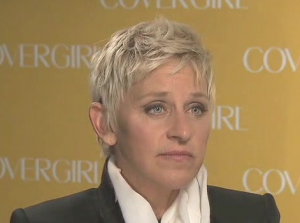 Ellen DeGeneres was caught up in a health scare on Monday after suffering chest pains during a production meeting. The comedienne was planning ahead for her hit daytime talk show on the Warner Brothers lot in Los Angeles when she started complaining of problems.

TMZ.com reports the Burbank Fire Department dispatched a crew to the scene just before noon local time and DeGeneres was checked out by paramedics.

She writes, “I woke up in the middle of the night. I was feeling a tightness of my chest and all the scary things… like something was heavy on my chest and it was a cat so I moved it. I still felt the tightness and heaviness, so there was another cat under that cat. There were two cats on my chest. Then I got to work and it was still happening. I was still feeling the pains.

“I was like… ‘I should check this out. It’s better to be safe than sorry.’ Who doesn’t want to see a fireman occasionally?

“We called the paramedics here on the Warner Bros. lot and about 50 trucks and ambulances, like, one marching band short of a parade showed up outside of my office. Then they come in with an axe. Break the door down. It was open. I don’t know why they did that. They came in, they asked me all the questions – ‘How are you feeling? When did it start? Family history…?’

“But everything is fine. I don’t know what it is but it’s fine…. I want to say thank you to all the paramedics and the nurses who showed up.”

Ellen Jokes About Her Health Scare