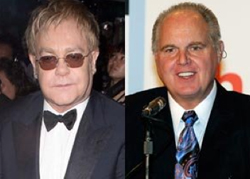 Elton John is famous for speaking his mind, and he’s at it again, this time in a fascinating and lengthy interview with the Telegraph newspaper, in which he goes in-depth about his past addiction issues, new music (which the paper describes as “his best in more than 30 years”) and his relationships with controversial conservative radio personality Rush Limbaugh and rapper Eminem.

The legendary singer received widespread criticism earlier this year when he accepted the staunchly anti-gay marriage Limbaugh’s invitation to perform at his wedding. “When [Limbaugh] asked me to play at his wedding, my agent said, ‘Well, of course you won’t be doing it,'” John tells the Telegraph. “But I said, ‘Well, let me think about that first.’ … Limbaugh’s not anti-civil partnerships, so maybe I can have a dialogue about that. I’ve put my foot in the water and so has he. I got on with him very well, got on very well with his wife.”