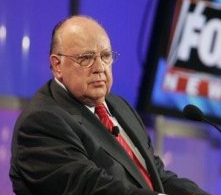 In a discussion yesterday at Ohio University, Fox News chief Roger Ailes blew the lid off the Jon Stewart‘s true ideology, apparently after being asked whether Stewart would do well without Fox News. Ailes commented that Stewart had more or less admitted to being a socialist while the two were in a bar. Which begs the question: where is this bar where Roger Ailes and Jon Stewart can be seen hanging out together?

The quote comes from a talk Ailes gave at Ohio University yesterday, where he spoke about the media generally and Fox News specifically, and how to run a successful news organization. Jim Romenesko rounded up tweets from journalist Jonathan Peters, who was at the event, and among the highlights was his apparent answer to a question on whether Stewart would fare well without his organization. The short answer? No:

Jon Stewart is a comedian. He wouldn’t do well without Fox. And he basically has admitted to me, in a bar, that he’s a socialist.

So that settles that. Among the other highlights of the talk are Ailes’ accusation that “Media Matters writes all of the primetime programming for MSNBC” and is “out of the news business,” meaning talent like Brian Williams “wouldn’t want to be caught dead over there.” He clarified that Fox News is not trying to acquire President Obama’s school transcripts and answered why he believed he could run Fox News: “One thing that qualifies me to run a journalism organization is the fact that I don’t have a journalism degree.”