Though Gabourey Sidibe has said she’s planning to bring her mom as her date to the 2010 Academy Awards, there is another person who’d definitely love to be by the Precious Best Actress nominee’s side as she steps on to the red carpet.

“Oprah called me and was like, ‘Hey girl, do you want to ride together?’ ” the 26-year-old Oscar contender told PEOPLE at Thursday’s third annual Essence Black Women in Hollywood luncheon.

“I was like, ‘I got it Oprah, calm down. I don’t want to show up with you. People will think we’re too cool.” 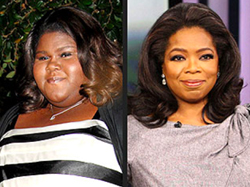 “She’s the only person that I’m continually star-struck by,” admits Sidibe. “When I meet people I get used to them very quickly because everyone seems like a friend because I watch them on TV. But Oprah is the only one I can’t get used to.”