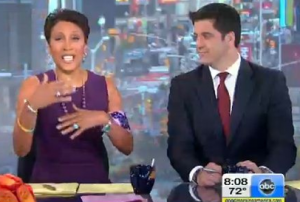 Robin Roberts left “Good Morning America” this morning just as the second hour began, announcing, “I’m not feeling too well.” She’ll be taking off the rest of this week and the next two weeks, part of which was a planned vacation, as she continues grueling chemotherapy procedures ahead of a bone marrow transplant expected in October.

In April, Roberts was diagnosed with MDS, a blood disorder that can occur in patients treated for other cancers. Roberts beat breast cancer in 2007.

Roberts made the announcement at 8:08: “A full disclosure here. I’m not feeling too well. I’m going to leave and let you do the rest of the program on your own. I’m going to take a little time off to get some vaca!”

George Stephanopoulos is off this week, so Josh Elliott has been co-anchoring while Amy Robach has been news reader. It was announced at TCA last week that Diane Sawyer, Barbara Walters, Katie Couric and Kelly Ripa would be among Roberts’ fill-ins when she goes on medial leave later this summer.