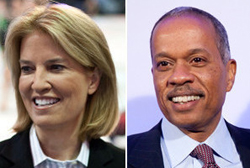 Greta Van Susteren, whose husband has worked as an advisor to Sarah Palin, took to her blog to question whether Juan Williams could back up his claim that Sarah Palin is not on the same “intellectual stage” as President Obama.

Williams made the comment when he was on a “Fox News Sunday” panel this past weekend.

Writing on Monday, Van Susteren asked, “has Juan interviewed either so as to have any knowledge about which he speaks? or is he just talking? Knowing if he interviewed (first hand knowledge) either and to what depth can help guide you as to whether you should credit his opinion or not. (Incidentally, I don’t know if he has….maybe he has.)”

After her blog post attracted some attention, Van Susteren followed up on Tuesday. In another post, she said that her purpose was not to defend Palin from Williams, or to target Williams, but to “drive home the point that there is a big difference between fact and opinion, and that when we express opinion, we should make sure that it is rooted in fact or experience or good judgment — and not simply slinging insults.”