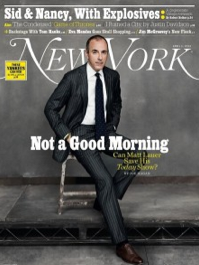 New York magazine’s Joe Hagan files an impressively reported story on the trials and tribulations of NBC’s “Today” for this week’s cover. The PDF of the story was forwarded throughout the NBC News offices, studios and newsrooms yesterday in advance of its release online.

“It hit like a ton of bricks,” one NBC News staffer told TVNewser. “It was a rough day.”

The article tells the behind-the-scenes drama of what went down on NBC’s “Today,” including the departure of Ann Curry. There are also some new revelations, including just how close Matt Lauer came to joining ABC News. According to Hagan’s sources, all the parties involved believed that the deal was done, and that Lauer could be joining Katie Couric on her new ABC talk show:

And at the moment they informed him of Curry’s exit, Lauer himself appeared halfway out the door. Three months earlier, Lauer had been angered by a press leak that [Steve] Capus and [Jim] Bell were talking to Ryan Seacrest about possibly replacing him. (Lauer learned of the leak while being forced to stand outside the security gate at the White House Christmas party because Ann Curry had forgotten her driver’s license.) In trying to placate Lauer, Burke had given him a window to explore other jobs, but they made it clear that Seacrest was really just an insurance policy; they didn’t want Lauer to leave. But Lauer, possibly as a negotiating tactic, was taking leaving pretty seriously. He’d begun working closely with Zucker to develop an idea for ABC: the Katie Couric daytime talk show with Matt Lauer—together again. Lauer met with Bob Iger, the CEO of Disney, ABC’s parent company, who made a strong effort to recruit Lauer.

Blake Shelton Jokes About Being Drunk On ‘Today’