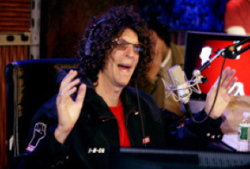 After all his threats to leave, and others’ speculation on where he might go, Howard Stern is staying put at Sirius XM.

The loose-lipped shock jock announced on his show Thursday that he has signed a new five-year contract with the satellite radio company.

The deal, which runs through the end of 2015, provides that Sirius XM can now transmit Stern’s show to mobile devices. No other terms will be disclosed, the company said.

Stern had been locked for months in stormy negotiations as his original five-year contract with Sirius radio, worth a breathtaking $500 million, neared its expiration just days from now. Sirius and then-rival XM radio merged in 2008.

Growing doubts from observers that Stern would stay had fueled a guessing game of where the self-proclaimed “King of All Media” might land: to Internet radio, premium cable TV, even back to terrestrial radio, where he once reigned while clashing with federal regulators over his sometimes raunchy content.

Earlier this week on his show, he vowed in typically salty (and uncensored) fashion that he would not accept a pay cut if he stayed at Sirius XM. But Stern remains the company’s biggest marquee name and customer draw among its more than 135 channels of commercial-free music and talk.

“On my first day in satellite radio Sirius had approximately 600,000 subscribers. Today, the two companies have 20 million, and, in my view, we have just scratched the surface of how many people will get on board,” Stern, 56, said in a statement.

“Howard forever changed radio and was instrumental in putting Sirius on the map when he first launched on satellite radio,” said Mel Karmazin, chief executive officer of Sirius XM. “He is one of the few ‘one-name’ entertainers in the country and our 20 million subscribers are lucky to have him.”

Stern, whose show airs from 6 a.m. to 10 a.m. EST Monday through Thursday, freed himself from the confines of terrestrial radio on Dec. 16, 2005, after hosting a wildly popular show syndicated by a division of CBS Corp.