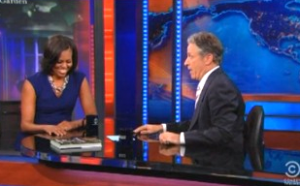 Host Jon Stewart kicked things off by asking if the First Lady wouldn’t have done better to have chosen colonization of Mars as her project over trying to get children and parents to make healthier choices. Later on, he made that point that, in some households, it’s quite a challenge to put a healthy, nutritious meal on the table after a long day of work when other, less healthy but faster options are so prevalent and readily available. “Is this, for you, more of a symbolic idea?” he asked.

On the subject of her husband’s young adulthood, Ms. Obama said that it took losing his father and pressure from his mother for him to really look around and make the decision to transfer to Columbia and really buckle down. “That was before me,” she noted. Stewart noted that former President George W. Bush also went through something of a “wild” period in his youth. “I really related to that,” said Stewart, prompting laughter from the audience. “It’s the turnaround…”

The First Lady didn’t miss a beat: “I’m not taking any bait.”

Kid Turns Down Trip to Disney on ‘Good Morning America’