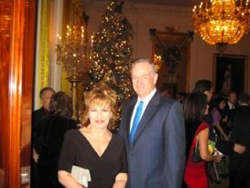 It was the confrontation to end all confrontations, the blowup that launched a thousand responses, the story that ran for weeks — but Joy Behar and Bill O’Reilly seemed ready to patch things up at this week’s White House Holiday Party, three months after their titanic clash on “The View.”

It was in October, of course, that O’Reilly came on “The View,” and Behar walked off the set over his comments about Muslims. The fallout from the incident continued for days, and indirectly led to the firing of Juan Williams from NPR for comments he made when discussing the incident with O’Reilly.

On Friday, though, the two reunited, and Behar tweeted a picture of the encounter.