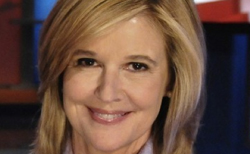 Kathleen Parker has been dropped from “Parker Spitzer,” and the show is being replaced by a new show called “In The Arena,” the network announced Friday.

In a memo to staff, CNN President Ken Jautz said that “In The Arena” would be an “ensemble” show, with “several newsmakers, guests and contributors joining Eliot Spitzer each night.” Among the regulars will be former Fox News anchor E.D. Hill and National Review writer Will Cain.

The reason given for Parker’s departure was her desire to focus on her syndicated column. In a statement, Parker said, “it was a difficult decision to scale back my column a few months ago and, with the show going in a new direction, it is a good time to move on.” But her exit comes after months of bad ratings and reports of heavy tension between her and Spitzer, as well as her and the show’s production staff.

In December, it was reported that Parker had threatened to quit the show, and had walked off the set in protest of what she felt was Spitzer’s domineering attitude. She acknowledged that there had been “editorial and political tensions” involved in the production of the show.

In January, the Wall Street Journal reported that CNN was considering replacing her.

Spitzer said in a statement that “it has been a joy working with her as a teammate, and I continue to be a huge fan of the wisdom that jumps from her written work and the wit, charm and insight she brings to all that she does.”