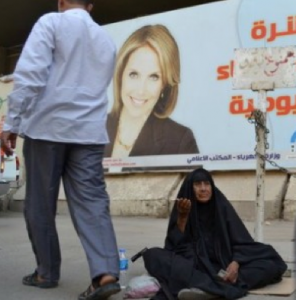 Quick, what’s the first name you think of when you hear the words “Iraq Electricity Ministry”?

If you replied, “Katie Couric,” then congratulations. Yes, Couric has become the face of Iraq’s state electricity company, with her face appearing on billboards, while speakers tell passerby when they can expect to have power that day. The picture in question is an official headshot from her tenure at CBS News.

“It doesn’t give me hope about electricity, but I like to see her beautiful face,” Habib Harbi, who sells watermelon in the summer and sweets in the winter, said as he looked across the street at the billboard from his fruit stand…

Mr. Mudarrs said the face of an American woman was sought for the campaign because showcasing an Iraqi woman would violate cultural taboos. And Ms. Couric, he said, was dressed appropriately in the picture — she was wearing a brown Max Mara blazer — and was the right age. “We didn’t want someone to be very old or very young, and she was in the middle,” he said. Mr. Mudarrs did say he was a bit worried that “when she finds out, maybe she will file a lawsuit against us.”

As for Couric, she tells the Times she finds the billboards “bizarre and slightly amusing.” The Times also note that the backup face for the campaign was former Fox News anchor Laurie Dhue.