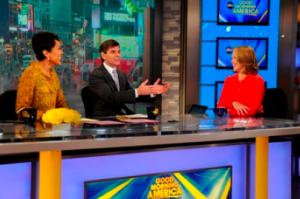 Nearly six years after she signed off from the “Today” show, Katie Couric is making a return to the mornings filling in next week for Robin Roberts on “Good Morning America.”

The fill-in, joining George Stephanopoulos, Josh Elliott, Sam Champion and Lara Spencer comes as “Good Morning America” continues to chip away at the perennial morning show leader, “Today,” where Couric spent more than 15 years. During the week of March 12, the younger viewer gap between the two shows was the smallest since July 2008.

We hear Roberts will make mention of the fill-in during the 8am hour of tomorrow’s show.

Couric set up shop at ABC News last Spring after spending five years at CBS News. She will launch her syndicated talk show “Katie” in the fall. Couric has hosted a few specials for the network and went on GMA last November to promote her Regis Philbin hour, but this is the first time she’s anchored since leaving the “Today” show in 2006. Couric returned to “Today” last April to promote her book “The Best Advice I Ever Got.”