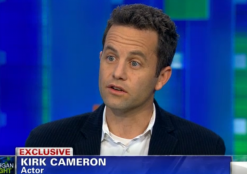 In a statement furnished to ABC News, the “Growing Pains” actor (and prominent born-again Christian) says that when asked by Morgan to share his views on homosexuality and gay marriage, “I spoke as honestly as I could, but some people believe my responses were not loving toward those in the gay community.”

“That is not true,” states Cameron, adding, “I can assuredly say that it’s my life’s mission to love all people.”

He continues, “I should be able to express moral views on social issues, especially those that have been the underpinning of Western civilization for 2,000 years — without being slandered, accused of hate speech, and told from those who preach ‘tolerance’ that I need to either bend my beliefs to their moral standards or be silent when I’m in the public square.”

Cameron concluded, “I believe we need to learn how to debate these things with greater love and respect. I’ve been encouraged by the support of many friends (including gay friends, incidentally).”