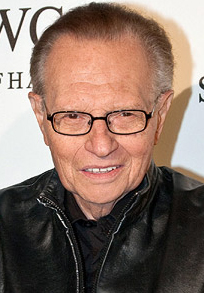 When he signed off his CNN talker at the end of 2010, Larry King promised that wouldn’t be the last time we’d see his mug. Some were doubtful, considering that Johnny Carson promised the same thing when he ended his talk show and was never seen on screen again. But true to his word, Larry’s already lined up his next gig. He has agreed to play a part he knows well — himself, in an upcoming episode of the ABC sitcom Better With You.

The episode, shooting the week of January 17 and tentatively scheduled to air in early March, finds Ben (Josh Cooke) running in to Larry, who happens to be a guest at the hotel Ben manages. Lar gives him advice on various matters, including how to pawn off an annoying couple — which turns out to be the parents of Ben’s longtime girlfriend, Maddie (Jennifer Finnigan): Vicky (Debra Jo Rupp) and Joel (Kurt Fuller). Oh, that Larry!