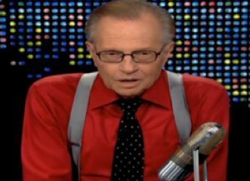 Larry King is winding down his talk show this week with some big guests–the biggest of which we don’t know about yet.

After 25 years on CNN, King will hang up his suspenders on Thursday, Dec. 16. His successor, Piers Morgan, will launch his own show, “Piers Morgan Tonight,” in January.

For his final lineup, King has so far decided to go the glitzy showbiz route instead of a more politically-oriented group. He talked to Conan O’Brien and Susan Boyle last night, and will speak to Wynonna and Naomi Judd on Tuesday night. On Wednesday, he will go to Barbra Streisand’s Malibu home for an hour-long conversation.

The guests for Thursday, King’s final day, are still unknown. There has been speculation that a host of news anchors, including Katie Couric and Barbara Walters, will show up. Or maybe King’s biggest guests ever, Ross Perot and Al Gore, will salute him. The only way to find out will be to watch.