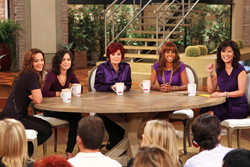 Coming off a strong July in which it drew its largest audience (2.21 million) and women 25-54 rating (1.0/6) since February, CBS’ daytime talk show The Talk is undergoing some changes. I hear that heading into Season 2, the show has picked up the options of co-host/creator Sara Gilbert and co-hosts Sharon Osbourne and Julie Chen, while the options of Leah Remini and Holly Robinson Peete have not been picked up.

While the future of Remini and Robinson Peete is unclear, they are not expected to return when The Talk kicks off its second season Sept. 6. The show’s producing team, led by John Redmann, who has been with The Talk since the beginning, is currently mapping out the show’s creative direction for Season 2 before a decision is made about potentially bringing in new co-hosts. Osbourne had recently asked for some time off in the fall to be with her husband, so she will return to the show after that.

The Talk, the first network daytime talk show to successfully premiere in nearly 10 years, has delivered a 0.7 women 25-54 rating to date on the CBS O&O stations, improving its time slot by 17%. In the top three markets, the ratings improvement is between 33% and 133%. Additionally, the talk show has been sold internationally in the U.K., Mexico, Canada and India. The Talk started off with six co-hosts. One of them, Marissa Jaret Winokur, left in January. There were also behind-the-scenes changes, with Brad Bessey, who oversaw the launch, leaving in April. He was briefly replaced by Susan Winston before Redmann took charge.