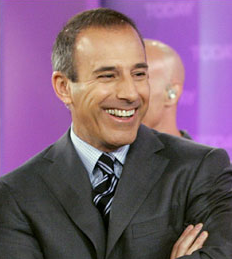 Will he stay or will he go? The rumors have been out there as to whether Matt Lauer will re-sign with The Today Show when his contract ends in December.

It turns out that money does talk and if NBC is willing to pay a record amount of it, a speculated $30 million, Lauer may stay.

TMZ is reporting that while Lauer was done with “Today” and wanted out, he will now re-sign if NBC ponies up way more than the $17 million he’s currently making. Negotiations are ongoing, but if NBC agrees, Lauer could score as much as $30 MILLION a year.

What caused Lauer’s change of heart? Could it be jealousy over the network talking to Ryan Seacrest as Matt’s replacement or maybe Lauer wanted to re-sign all along and just played the “I’m leaving” card to score a bigger pay day.

What do you think – is $30 million too much for Lauer to stay on The Today Show? Would you rather see him or Ryan Seacrest as the host of the morning show?