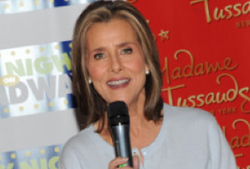 TV Guide is reporting that Meredith Vieira is expected to leave her position as co-host of the ‘Today’ show when her contract is up later this year. She has been a co-host since 2006, when she replaced Katie Couric,

Vieira, TV Guide’s Stephen Batagglio reports, is tiring of the grinding, early-morning schedule for the show, and is concerned about her husband, who suffers from multiple sclerosis. He says that NBC is trying hard to get Vieira to stay.

It would actually be the second contract renewal for Vieira; her previous contract was up last year, but she signed a one-year deal to extend it until at least September 2011.

She has not been shy about saying she could leave “Today.” In October, she told Ladies’ Home Journal, “I’m not afraid to go, and I’ll know when it’s time to go.”

If Vieira goes, a top candidate to replace her would be Ann Curry, the news reader and fellow host of “Today.” Curry was also a leading contender to replace Couric. Last year, Curry wrote that she “would’ve loved” to get the job then.