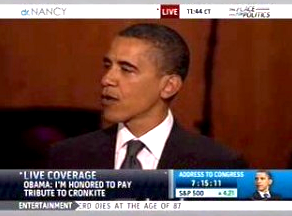 MSNBC has secured its first interview with President Obama in quite some time. Obama will be interviewed by Joe Scarborough and Mika Brzezinski on “Morning Joe” Monday, at a campaign event in New Hampshire.

While Obama has not been interviewed recently on MSNBC, he has been all over NBC this week. Brian Williams followed the President on the trail for a few days this week, and presented his report on last night’s “Rock Center” 9watch a clip after the jump). Excerpts from the interviews have also aired on “Nightly News” and “Today.” In addition, President Obama was a guest on “The Tonight Show with Jay Leno” Wednesday.