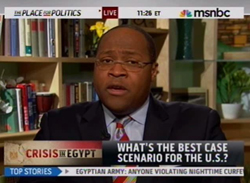 This morning, during continuing coverage of the situation in Egypt, Comcast Network’s Washington Bureau chief Robert Traynham did a Q&A with anchor Alex Witt about White House reaction to the crisis.

“A special welcome to you, Robert. Welcome to the family officially. Glad to have you,” said Witt during the first of Traynham’s two segments so far today.

Traynham joined Comcast Network in 2007. He hosts “Roll Call with Robert Traynham,” a political talk show produced in conjunction with Roll Call. Before Comcast, Traynham worked on Capitol Hill, including as a top aide to former Sen. Rick Santorum (R-PA).

MSNBC is going live into the afternoon (ET) hours covering the crisis in Egypt. By this time, the network has usually gone to taped programming. Also, last night, “The Ed Show” aired live pre-empting “Lockup” at 10pmET.