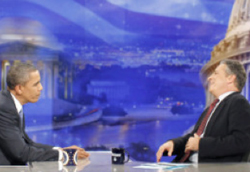 The interview, which took up the entire episode, was watched by 2.8 million viewers. That’s nearly a million more than the usual 1.9 who tune in. 1.7 million of those were in the coveted 18-49 demographic.

Comedy Central told the New York Times that it was the third-highest rated episode in the history of “The Daily Show” — behind only Obama’s last appearance in October 2008 and Michelle Obama’s appearance in the same month.

In addition, the Hollywood Reporter notes that Comedy Central’s website experienced a surge in traffic as well, with 890,000 streams of the interview being played.

Conan vs. Jay: New Details on the O’Brien-Leno Fiasco