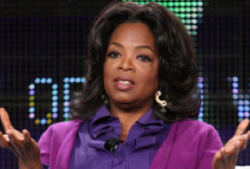 It’s probably safe to say the movie “Bride of Chucky” is not one of Oprah Winfrey’s favorite things.

In an outtake from her interview airing next Monday on the debut episode of Piers Morgan Tonight, the talk-show queen indirectly blames a certain maniacal doll for creating a huge hankering for a popular creamy concoction.

Winfrey tells Morgan that when her film “Beloved” came out in 1998, its lack of success during opening weekend caused her to go into “a massive, depressive macaroni and cheese-eating tailspin.”

“It premiered on a Friday and I remember hearing on Saturday morning that we got beat by something called Chucky,” she recalls. “I didn’t even know what Chucky was. So, I asked my chef at the time to make some macaroni and cheese…and I ate about 30 pounds worth. I’m not kidding!”

But when it comes to failure, Winfrey stresses the importance of using it as a learning experience.

“I think the way life is set up, for most people who have the opportunity to succeed, is that if you get the lesson, you don’t have to repeat that again.”