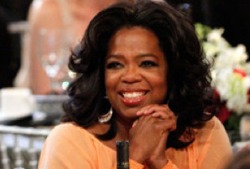 “The Oprah Winfrey Show” drew a 6.1 rating from Nov. 7th-14th. That’s the highest rated week for the show since February 2008. The week included the four highest rated episodes of the season, which featured Michael Jackson’s mother Katharine, Oprah’s former talk show rivals, Marie Osmond and George W. Bush, respectively. The Jackson episode won the prize for top rated episode of all, with a 6.7 rating.

The show remained the most watched talk show in syndication for the 602nd week in a row.