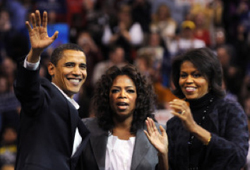 When talk show queen Oprah Winfrey announced she was publicly supporting Barack Obama for president back in 2008, she shocked many TV insiders who had always thought it best for talk show hosts to keep their political views to themselves.

Now as the 2012 election process has officially begun, sources tell me this time around Oprah’s support will be much more private.

“For 2012, much has changed for Oprah. She now has own cable channel called OWN that has been struggling to find an audience — she isn’t going to do anything to alienate them,” a TV insider tells me. “Unlike in 2008, when a drop in ratings didn’t matter as much for the queen of TV, Oprah is now fighting every day to get people to tune into OWN.”

Oprah Winfrey’s daily talk show ratings dropped in 2008 after her highly publicized political rally for Barack Obama’s presidential campaign. An October 2008 Gallup poll before the rallies but after Oprah’s public endorsement of Obama found that Oprah’s favorable ratings had fallen from 74 to 66 percent while her unfavorable ratings jumped from 17 to 26 percent. Then came news that Oprah’s TV ratings showed that her daytime audience, which was nearly 9 million at its height in 2004-05, had fallen to 7.3 million.

As much as Oprah may still love President Obama and may support him behind the scenes, do not expect to see the same public support you saw in 2008. As my source puts it, “Helping a friend keep the most important job in the world is great, but making sure her OWN network thrives is now her priority.”