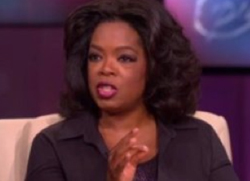 OWN: The Oprah Winfrey Network goes live with a sneak peek of its programming schedule today, including the one-hour special “Oprah Presents OWN,” which airs at noon and 6 p.m. and will introduce some of the network’s stars and shows.

Here are some highlights of the channel’s original programming;

“Addicted to Food”: A docu-series that follows eating-disorder patients as they go through treatments. Premieres spring.

“Breaking Down the Bars”: Inside the Rockville Correctional Facility in Indiana the cameras are rolling as a group of women struggles with incarceration. With the help of therapist Dr. Stephanie Covington, “Bars” dives deep inside their stories and those of their loved ones. Premieres summer.

“Carson-Nation”: Best known from “Queer Eye for the Straight Guy,” Carson Kressley, a longtime Winfrey contributor, is working double time for OWN. Also co-hosting alongside Nancy O’Dell on “Your OWN Show: Oprah’s Search for the Next TV Star,” the fashionista is clearly thrilled about his own style-centric gig, “Carson-Nation.”