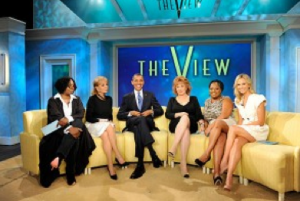 President Obama will be making his second appearance on ABC in as many weeks next Tuesday, though this time it won’t be for ABC News. Obama will be a guest on the ABC daytime program “The View.” The interview will be taped Monday as part of the show’s “Red, White & View” campaign. Also, it’s sweeps.

We are honored to have President Obama visit ‘The View’ for the fourth time, and we promise to let him get a word in edgewise,” said host Barbara Walters in a statement.

ABC says that topics of discussion will include “his administration’s accomplishments, jobs, the economy and family life inside the White House,” but given the news he made yesterday, look for gay marriage to be a hot topic as well.

Incidentally, President Obama’s last visit to “The View” back in July, 2010 was the show’s most-watched episode ever.

CNN reports that Obama originally intended to make his announcement on gay marriage during his appearance on “The View.”